Last Updated by Ursula Palmer on 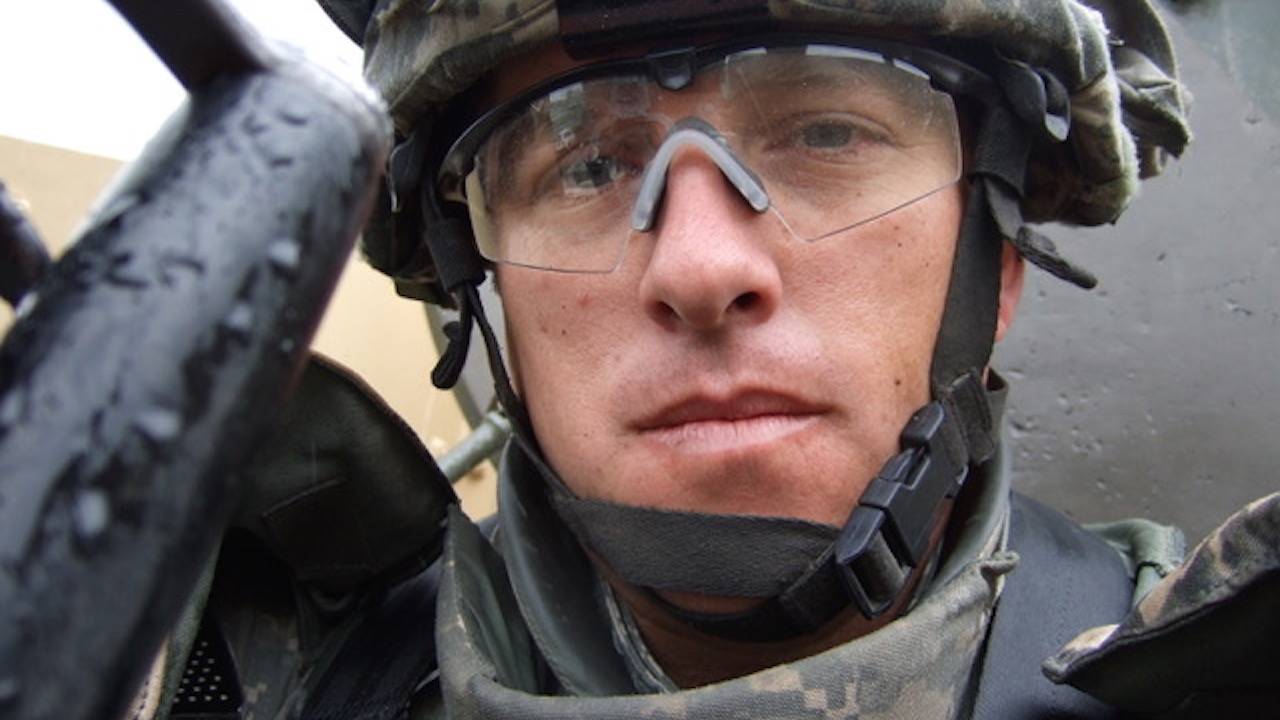 April 5 is designated as Gold Star Wives Day. While it is nice to have a day where we are recognized, I am just hoping it helps other people remember that there are a lot of children who are growing up without their parents. That there are a lot of spouses who now have to raise their children without their partner. When I first came to the U.S., I admired that Americans had this incredible love of country in their hearts, especially after 9/11. Lately, however, as a proud American, I have felt that there is a decline in patriotism and respect for those who have made the ultimate sacrifice and I hope today will serve as a reminder that there are a lot of people who have suffered to protect the freedoms enjoyed by all Americans.

When I met Collin, I was working on my masters at University of Maryland Baltimore County and teaching Spanish to undergraduates at the same time. It was my first time teaching college and I barely knew any English. There I was in front of 25 eighteen-year-olds— it was very scary. Then this guy, this older, very handsome guy walked in and I felt relieved to have someone my age in class. But, Collin did not come back. He told his new teacher that he had to switch because, while I was “muy caliente,” the class was too difficult. But, the next semester, low and behold, Collin came into my class and sat in the front row. He was extremely dedicated- he was serving in the National Guard, studying full time and helping support his two daughters from his first marriage. That was the kind of man he was. Though I kept my distance during class, Collin never missed an opportunity in writing assignments to let me know he liked me. I still have all of his papers and treasure them. After the end of the semester, we continued to talk and that summer he invited me out and I said yes. A year and a half later we were married. It felt meant to be. 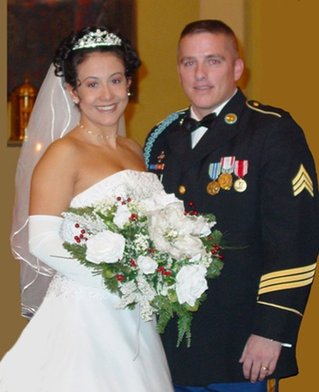 Collin and Ursula's Wedding Growing up, I was always afraid of marrying someone in the military. My father used to take me to theatre performances back in Colombia where we would always see these heroes leave for war and never come home. It was a romantic idea, but it made me afraid to get involved with someone in the military. Then, I met Collin.

He used to always reassure me that because he was National Guard, if he was deployed it would be within the continental United States. But, after 9/11, Collin had to do his part for his country and in November 2006, he volunteered to go to Afghanistan. Collin was only 5’5” but he was extremely strong and he was what some people would call “gung-ho”. He became more and more dedicated to his National Guard career and whatever mission he was in charge of, you knew it would be successful. He always said, “It’s what I’m good at.” In spite of the superstition most soldiers feel about going on missions right before their tours are over, two weeks before Collin was ready to come home, he volunteered to go on one last mission because he knew the terrain so well. Before he left, he charged up his phone and told me that every day he would call me, every day for just one minute so I would know he was okay. He did it, he managed to call me every day. Then, January 2, 2008, he didn’t call. I gave myself every excuse. Maybe his phone ran out of charge, maybe he couldn’t use the satellite phone that day for some reason, but I knew that something was wrong. Then, I got the call. Collin was severely injured in an IED attack. We used to talk about if he died or if he got injured, what kind of injury he thought he could handle. He said he did not care if he lost a limb, but he did not want to get burned. However, a severe burn is exactly what happened on more than half his body including his face, head and extremities. That was hard, that was very difficult.

He spent two and a half months in Brooke Army Medical Center San Antonio, Texas and had 15 surgeries fighting to stay alive. I was by his side the entire time. I was only able to do this because of my bosses who were so supportive. They were my lifeline because my family back in Colombia was unable to come to the U.S. It eventually got to the point where Collin was just being kept alive. From our conversations before he left, I knew he did not want this. Eventually, it got to that point and we had to make the hardest decision we would ever have to make. His family was all there and we stayed with him, surrounding his bed as he took his last breath on March 14th, 2008 at 1:03am. 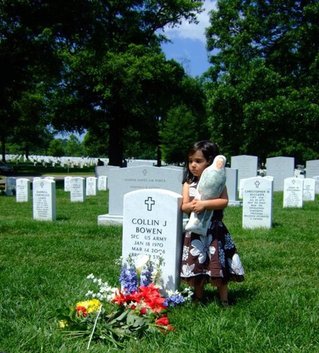 Gabriela Bowen at Collin's Grave When Collin passed, all my worst fears had come true. I found solace in my spiritual beliefs. Something told me this was the place I had to be. I had to be strong for my daughter. It was something I had to handle because it was not just about me. I had another life, a 3-year-old little girl who was now without a father. I had to be, as much as I could, father and mother for her. I will say one of the hardest things to do is to raise a child without a parent, especially when they had a good father in their life before. And Collin was a great father.

With Collin gone, I felt empty. I knew there had to be something else that would make me feel fulfilled. I didn’t want to feel the victim, but everything that I feared so much would happen, had happened. What I found is that I was able to feel a sense of empowerment by trying to help others who lost loved ones in war. For years, I tried to be a part of this community through my local Gold Star Wives organization, but I found myself feeling really discouraged. It wasn’t a lack of caring, but most of the Gold Star Wives, at that point, were from older wars and the organization’s activities served a different need than the newer Gold Star widows were seeking. Our solution was to create a new chapter where post-9/11 widows, especially those with young children, could help each other through their current issues. In 2012, with the leadership of Vivianne Wersel as President and myself at Vice President, we created the Gold Star Wives, Arlington Chapter.

The Arlington Chapter of the Gold Star Wives is unlike most local chapters. We used technology to create a new kind of chapter. We wanted to help those who’ve recently had to bury their husbands in Arlington National Cemetery, but do not live in the area. Because they cannot regularly visit their husbands, we keep in touch with them, visit their husbands at Arlington, lay flowers and send them pictures. We wanted to let them know that we are here for them, we care and their husband’s sacrifice will not be forgotten. Working with widows though the Gold Star Wives gives you a different perspective. I have been able to take the things I have in my life and make something better out of them by being there for others in my situation or worse. You start to see how blessed you are.

I will always be a Gold Star Wife. But in 2010 one of Collin’s best friends and also a Guardsman introduced me to an active duty soldier, we fell in love and got married. His family goes above and beyond supporting us and honoring Collin’s memory both in our daily lives and through commemorative events, and I am very grateful for that. Tim is an amazing father figure to my daughter; we’ve given her a brother and I feel so blessed. However, on April 5, I will wear my Gold Star pin and remember my husband, SFC Collin J. Bowen and all the military men and women whose lives were lost in service to our nation.

The Arlington Chapter of Gold Star Wives of America, Inc.

The Arlington Chapter of Gold Star Wives of America, Inc. is an organization of widows and widowers whose spouses died while on active duty in the military services or as the result of a military service connected cause. The chapter serves to work with government relations to raise the awareness of unique challenges faced by survivors, including issues such as the elimination of the SBP/DIC offset, increasing the DIC benefit and increasing educational opportunities and improving health benefits for spouses and children of the fallen. 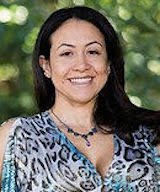 Ursula Palmer is a Certified Project Management Professional and holds two Master degrees in communications. She is the Vice President of the Arlington Chapter of the Gold Star Wives, established on April 5, 2012 to appeal particularly to post-911 Gold Star widows and widowers. Gold Star Wives of America, Inc. is a non-profit organization of widows and widowers whose spouses died while on active duty in the military services or as the result of a military service connected cause, originally created in 1945. Ursula currently works for Links to Freedom in Virginia, which uses adaptive golf as a rehabilitation tool for wounded warriors, disabled/ill veterans, families and caregivers, and survivor spouses and their children. She sits on the Advisory Board for Got Your Back Network, a non-profit organization also serving children of the fallen.