Every year the National Memorial Day Concert honors those who have died in service to America. In 2015 we paid special tribute to the more than 4 million disabled veterans who served and survived. For these wounded warriors and their families, the struggle continues. 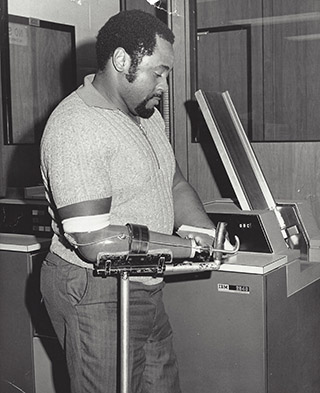 After graduating from college, Ted worked for the federal government for many years. In 1966, Ted Strong was a Fort Jackson drill sergeant driving a red Mustang, dating his wife-to-be and making plans to open a health club.  Life, he said, was good. That November he was shipped to Vietnam.

On a quiet Sunday morning in the Central Highlands, Ted tripped a land mine that took his right arm and led to amputation of his right leg at the hip. The drill sergeant whose friends once called him “Mr. Hercules” came home emaciated and broken — a man, he said, “with half a body.”

Ted’s life since then — learning to walk again, graduating from college on the GI bill, raising a family — is a lesson in resilience and compassion.  Visitors can read Ted’s words etched into the new American Veterans Disabled for Life Memorial:

It's possible for a man to lose half of his physical being and still become whole. Before I lost my limbs, I was only half a man. Now I've developed some humility. I can look at the average person and understand him, where before I looked only at myself.

Romulo Camargo always wanted to be a soldier; once he became a soldier, he wanted to be Special Forces.  Romy served in the 75th Ranger Regiment and 7th Special Forces Group and married Gabriela, the love of his life.  They had a son.  During his third deployment, leading a humanitarian mission to Afghanistan in 2008, he took a direct and shattering hit to the vertebrae and was paralyzed from the neck down. 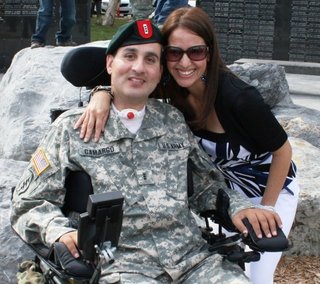 Romy and Gaby Camargo were childhood sweethearts. For 18 months in a polytrauma hospital, Romy faced the hardest battle he’d ever fought, with his wife, Gaby, at his side.  Romy weaned his body off of the ventilator; therapy helped manage his nerve pain.  He learned to live in his new body and, together, Romy and Gaby built a new life.

But, just as he had when he was a soldier, Romy wanted to do more.  He and Gaby dream of helping others with spinal cord injuries in the Tampa rehabilitation center they are working to build.  Knowing how critical Gaby’s love and support were to Romy’s recovery, the center will provide special support to caregivers as well.

Learn more about the inception and development of the American Veterans Disabled for Life Memorial, dedicated on October 5, 2014, only steps from the U.S. Capitol in Washington, DC.