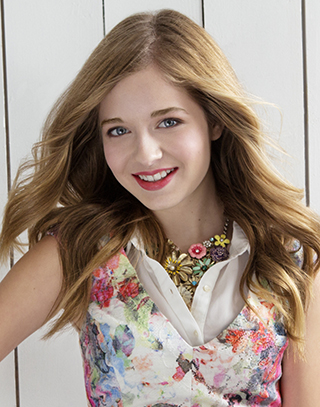 Jackie Evancho Jackie Evancho’s first performance on NBC’s variety show America’s Got Talent left audiences and judges astonished that such a perfect, beautiful, soprano voice could come from a 10-year-old girl. During her next appearance in the competition, judges asked her to improvise a tune, which she performed flawlessly. It wasn’t just her musical gift and her age that floored the America’s Got Talent audience; it was her presence, poise and charm that truly made them take notice. One of the show’s judges, Piers Morgan, told Evancho, “You’ve got the whole package.”

The young soprano from Pittsburgh with the stunning voice won runner-up and launched her soon-to-be legendary career, signing with Columbia Records shortly thereafter.

“She is a prodigy; they break the rules by definition,” wrote music critic Andrew Duckenbrod in the Pittsburgh Post-Gazette after seeing the then 11-year-old perform to a sold-out crowd in her hometown in October 2011. “[Her] voice mesmerizes. She has become one of the performers who has been defining the ‘crossover classic’ category of singers – those who are equally comfortable with Puccini or pop.”

In a little over two years, her unique, gorgeous, soprano voice has garnered millions of fans, and her recordings have dominated the music and DVD charts. Now 14, Evancho has won the support of legendary music producer David Foster and filmmaker Robert Redford, among others. Billboard Magazine named Evancho on its list of music movers-and-shakers under the age of 21 in 2011, and again in 2012, because the soprano’s “spellbinding, operatic vocals possess a power and poignancy that often moves listeners multiple times her age to tears.”

Her debut EP, O Holy Night, was released in November 2010. It became the year's No. 1 best-selling debut recording, with sales exceeding 1 million copies, and earned her a platinum certification. In June 2011, Evancho released her first studio album, Dream With Me. A mix of operatic arias, show tunes, and pop standards, the album debuted on the Billboard Top 200 chart at No. 2 and was certified gold after only four weeks of release. Heavenly Christmas was released in November 2011 and became one of the top-selling holiday albums of the year.

Evancho has participated in the National Christmas Tree Lighting in Washington, D.C., where she sang - and delighted - President and Mrs. Obama. Two months later, she was invited to perform again, this time for the President and Congressional leaders during the National Prayer Breakfast.

In early 2012, she was selected to travel to Russia to perform in front of 100,000 people prior to the opening of the St. Petersburg Economic Forum. Evancho, representing the United States, was honored to sing with opera stars, Dmitri Hvorostovsky, of Russia and Sumi Jo, of Korea. Her fan base also extends to Japan, where she was invited to perform for the royal family at the Imperial Palace. She tours regularly with the Tokyo Philharmonic to sold-out venues.

Her U.S. shows also sell out and have been taped for broadcast on PBS for the Great Performances series. Her first PBS special was one of the top pledge-producing performances in PBS’ history. When PBS aired Jackie Evancho: Dream with Me in Concertduring the latter half of 2011, it instantly became one of the station’s most broadcast programs of the year and was used extensively during pledge drives.

She was asked to do another show for the Great Performance series in 2012, Jackie Evancho: Music of the Movies,which features classic songs from movies as diverse as Some Enchanted Evening from South Pacific, My Heart Will Go On from Titanic, and Se from Cinema Paridiso.

Capping off an incredible year, she released her third studio album, Songs From The Silver Screen on Oct. 2, 2012. The album debuted at No. 1 on the Billboard classical charts and at No. 7 on the Billboard Top 200 album chart.

Most recently, Evancho has tried her hand at both acting and modeling. She made her acting debut in The Company You Keep. Legendary actor, director and producer Robert Redford cast her to play his daughter in the thriller, which came out in theaters in April 2013. “I am so happy that Mr. Redford picked me to be in his film. And I am excited to learn from performers that are amazing at what they do,” says Evancho, who is part of a star-studded cast that includes Susan Sarandon, Shia LaBeouf, Anna Kendrick, Terrance Howard, Nick Nolte and Stanley Tucci.

Off screen, she was selected by GUESS owner, Paul Marciano, to star in both of the Fall 2012 GUESS Kids clothing campaigns. “I have had so much fun and done so many challenging things. But while I really enjoyed all the traveling and the acting and had such a great time posing in all those great clothes for GUESS, singing is still the thing I love the most,” said Evancho.

In March 2013 she performed as part of an unprecedented Cirque du Soleil extravaganza at the Bellagio’s O Theatre to support One Night for One Drop on World Water Day. For the first time ever, all Cirque du Soleil shows closed their doors in order for 200 performers to collaborate in the once-in-a-lifetime show. Evancho starred as the show’s special guest and participated in a breathtaking water and aerial performance.

Evancho is currently recording her third studio album, scheduled for a fall 2014 release. This will be followed by a world tour.