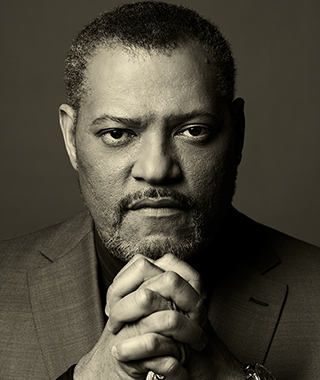 Laurence J. Fishburne III has achieved an impressive body of work not only as an actor but also as a producer and director.

In 1992, he won the Drama Desk, Outer Critics Circle, Theatre World, and Tony awards for his portrayal of Sterling Johnson in August Wilson’s Two Trains Running, directed by Lloyd Richards. The following year, his performance as Martin in “The Box” episode of the television series Tribeca, directed by Michael Dinner, earned him an Emmy Award. The following year, he was an Academy Award nominee as Best Actor for his portrayal of Ike Turner in Brian Gibson’s What’s Love Got to Do With It, opposite Academy Award nominee Angela Bassett.

Mr. Fishburne was later an Emmy Award nominee for his portrayal of Thurgood Marshall, broadcast as an adaptation of his one-man show, Thurgood. He originated the role in the Broadway debut of the play, written by George Stevens, Jr., and directed by Leonard Foglia, again earning a Tony Award nomination and winning Drama Desk and Outer Critics Circle awards. He also reprised the portrayal at the Geffen Playhouse in Los Angeles and at the Kennedy Center in Washington, DC.

He was an Emmy Award nominee and an NAACP Image Award winner for his starring role in the telefilm Miss Evers’ Boys, which he executive-produced. Based on the true story of the Tuskegee Study, Miss Evers’ Boys won five Emmy Awards, including Outstanding Made for Television Movie and the coveted President’s Award, which honors a program that illuminates a social or educational issue. Alfre Woodard portrayed Miss Evers in the telefilm, directed by Joseph Sargent.

Mr. Fishburne has been acting since the age of 10, starring on the daily television drama One Life to Live before making his feature film debut at age 12 in Cornbread, Earl and Me, directed by Joseph Manduke. At 14, he was cast in a show being staged by the Negro Ensemble Company and also accepted to the High School of Performing Arts, in New York City. At age 15, he was cast in Francis Ford Coppola’s classic Apocalypse Now.

Through Cinema Gypsy, he is slated to executive-produce and star in The Right Mistake, a dramatic television series for HBO. Mr. Fishburne will be reprising his portrayal of author Walter Moseley’s Socrates Fortlow character, whom he had previously portrayed in the telefilm Always Outnumbered. Mr. Moseley will also be an executive producer on The Right Mistake.

In 1999, he starred as King Henry II, opposite Stockard Channing, in the Roundabout Theater Company’s Broadway revival of James Goldman’s The Lion in Winter, staged byMichael Mayer.

In 2006, he starred in Alfred Uhry’s drama Without Walls, directed by Christopher Ashley, at the Center Theatre Group’s Mark Taper Forum in Los Angeles, and was awarded Best Actor at the NAACP Theater Awards. That same year, Mr. Fishburne reteamed with his frequent acting partner Angela Bassett at The Pasadena Playhouse in August Wilson’s Fences, directed by Samuel Epps; the production broke the Playhouse sales record with a sold-out run.

He can currently be seen alongside Anthony Anderson and Tracee Ellis Ross in the hit ABC series Black-ish, for which he serves as executive producer. His performance garnered him a Peoples’ Choice Award nomination for Favorite Actor in a New TV Show and a NAACP Image Award for Outstanding Supporting Actor in a Comedy Series. He also appears alongside Hugh Dancy and Mads Mikkelsen in the NBC thriller series Hannibal. Previously, he starred for three seasons on the hit series CSI: Crime Scene Investigation.

Mr. Fishburne serves as an Ambassador for UNICEF. In 2007, he was honored by Harvard University as Artist of the Year for his Outstanding Contributions to American and International Performing Arts as well as his humanitarian contributions.