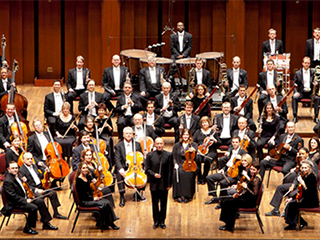 The National Symphony Orchestra of the John F. Kennedy Center for the Performing Arts, led by Music Director Christoph Eschenbach, is recognized not only nationally but also internationally, and is considered one of the world's finest ensembles. The orchestra, in its 84th season (2014-15), maintains a busy concert schedule in this country and abroad. Within the last three years the NSO has visited nine countries on four continents. The NSO performs approximately 150 concerts each season, including a classical subscription series, pops concerts, a summer series at Wolf Trap, and one of the nation’s most varied and extensive educational programs. The National Symphony is particularly distinguished for its commitment to the music and musicians of this country, exemplified through several innovative projects, among them the American Residency program, which took the National Symphony to 21 states performing concerts and providing educational services, with all proceeds benefiting artistic organizations in the local states. Through the John and June Hechinger Commissioning Fund, the orchestra has commissioned nearly 70 works by American composers; two have earned Pulitzer Prizes, and the series also includes cycles of fanfares and encores, which, taken as a whole, are representative of the diverse influences in American composition today. The orchestra provides free public concerts on the West Lawn of the U.S. Capitol, as well as at other venues around the Washington, DC, area. For more information on the National Symphony’s programs, please visit www.nationalsymphony.org.