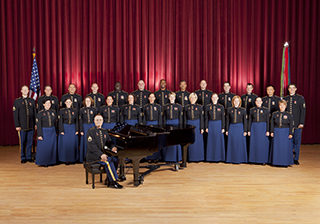 The Soldiers' Chorus of The United States Army Field Band

The Soldiers' Chorus is the vocal complement of the U.S. Army Field Band of Washington, DC. The 29-member mixed choral ensemble travels throughout the nation and abroad, performing as a separate component and in joint concerts with the Concert Band of the “Musical Ambassadors of the Army.” The chorus is currently conducted by Major Scott McKenzie and has performed in all 50 states, Canada, Mexico, India, the Far East, and throughout Europe. The musical backgrounds of Soldiers' Chorus personnel range from opera and musical theater to music education and vocal coaching; this diversity provides unique programming flexibility. In addition to presenting selections from the vast choral repertoire, Soldiers' Chorus performances often include the music of Broadway, opera, barbershop quartet and Americana. This versatility has earned the Soldiers' Chorus an international reputation for presenting musical excellence and inspiring patriotism. Critics have acclaimed recent appearances with the Boston Pops, the Cincinnati Pops, and the Atlanta, Dallas, Detroit, Nashville, and National Symphony Orchestras. Other notable performances include four world’s fairs, American Choral Directors Association conferences, music educator conventions, Kennedy Center Honors programs, the 750th anniversary of Berlin, and the rededication of the Statue of Liberty. The Soldier’s Chorus has also been honored to participate in the state funerals of Presidents Ronald Reagan and Gerald Ford as a part of the Armed Forces Chorus. For more information, visit http://www.army.mil/fieldband/pages/ensembles/sc.html .