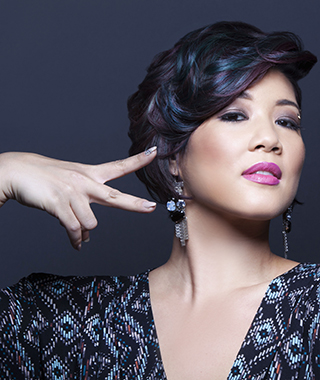 Tessanne Chin continues a long musical tradition for the Caribbean—with a twist.

On her self-titled debut, full-length album for Republic Records, the season five winner of NBC's The Voice definitely upholds the hallmarks of her heritage while touting a decidedly spunky pop spirit. She's got attitude. She's got style. She's got soul.

She was also meant to make music. Born to two musician parents in Jamaica, she says her earliest memories include falling asleep on lounge chairs at Mom and Dad's practice sessions and long hours in the recording studio. Soon enough, she found herself behind the microphone.

"I was five years old, and my daddy's band was having a rehearsal," recalls Tessanne. "I don't know what came over me, because normally the kids weren't allowed to go and mess with the musical instruments or equipment. However, I picked up the mic and started singing 'Stand By Me.' They backed me on guitar, and I knew from that moment it was what I wanted to do. The feeling being up there was indescribable. It changed my life."

After high school in England, Tessanne returned home to officially kick off her career. With the endorsement of family friend and drummer Desi Jones, the legendary Jimmy Cliff chose her as a backup singer. For three years, she toured alongside the reggae icon, picking up invaluable experience along the way. Following a stint fronting the rock band Mile High, she released her first solo hit, "Hideaway," which topped the Jamaican charts and propelled her career in the Caribbean. At the same time, she wanted to reach a much bigger audience, which led to her auditioning for The Voice.

Urged by a friend, none other than international reggae pop sensation Shaggy, she auditioned for the show and experienced the proverbial whirlwind that followed. Maroon 5 main man Adam Levine became her coach, and she delivered an astounding take on Simon & Garfunkel's "Bridge Over Troubled Water," which soared to #1 on the iTunes Overall Top Songs chart—a first for the show. She gained countless fans, and eventually took home the top prize.

“I didn’t expect that in a million years,” beams Tessanne. “I will never forget that day for the rest of my life. I was in genuine shock when they called my name. I’m still overwhelmed! It was never about me. It was about my country. It’s something for the Caribbean that I’m very proud of. I’m blessed to have their support and give it back to them.”

She truly does everyone proud on the album, from her earliest supporters to the countless American viewers who fell in love with her on The Voice. Featuring production by OneRepublic's Ryan Tedder as well as collaborations with the likes of her "biggest influence," Damian "Jr. Gong" Marley, and more, she conjures up an infectious sound that's equally fierce and feisty.

"It's pop, but it has a bit of an island swag because that's what sets me apart and is in my blood," she goes on. "It has a vibe to it. The music's got really fat beats with amazing vocals, but the lyrics are meaningful. It isn't following a trend."