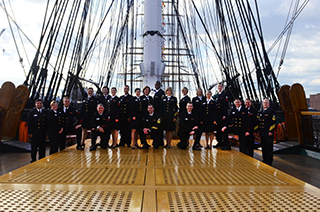 The Navy Band Sea Chanters is the U.S. Navy’s official chorus. The ensemble performs a variety of music ranging from traditional choral music, including sea chanteys and patriotic fare, to opera, Broadway, and contemporary music. The Sea Chanters chorus is frequently found at the center of our most important national events. They have played a vital role in comforting the nation in times of mourning, including appearances at memorials for the astronauts of the space shuttle Columbia, the presidential wreath-laying ceremonies at the United Airlines flight 93 crash site in Shanksville, Pennsylvania, and the National Day of Prayer and Remembrance at the National Cathedral in Washington after the events of 9/11. The chorus participated in the funerals for former Presidents Ronald Reagan, Gerald Ford, and Richard Nixon. They have appeared at the Kennedy Center Honors and with the National Symphony Orchestra for the nationally telecast National Memorial Day Concert at the U.S. Capitol. In addition, the group has appeared on Larry King Live, Fox and Friends and CBS This Morning and performed at the 2014 Super Bowl, as well as at the premier of the movie Pearl Harbor. The Sea Chanters have performed with the Mormon Tabernacle Choir under the direction of Mack Wilburg, as well as noted choral directors Dale Warland and Donald Neuen, and have performed with the Kansas City Symphony, the Boston Pops Esplanade Orchestra, the Baltimore Symphony, the Cincinnati Pops Orchestra, Perry Como, Marian Anderson, Kenny Rogers, and Lionel Richie. For more information, visit http://www.navyband.navy.mil .