GOLD STAR: Honoring the Service and Sacrifice of Loved Ones

Jacke Walton recounts the tragic cost of war for her family and honors her father, SFC Lewis C Walton's sacrifice in Vietnam.

Jacke Walton was only six-years-old when her father, Special Forces Sergeant First Class Lewis Clark Walton, shipped off to Vietnam in 1970. As a Green Beret, there was a strong possibility that SFC Walton would find himself in harm’s way. He told Jacke, her mom and her younger brother Lew that he’d always wear his St. Christopher’s medallion, which would keep him safe.  But all Jacke knew was that she missed her daddy and wanted him to come home.

In May of 1971, Walton and two fellow Green Berets – Staff Sergeant James Luttrell and Staff Sergeant Klaus Bingham – were part of a long-range reconnaissance team dropped into a remote area of Quang Nam Province near the Laotian border. During the excursion, chaos ensued; the patrol was ambushed and the Green Berets were never heard from again.

Although the discovery and subsequent burial of SFC Lewis Clark Walton’s remains provided closure for Jacke and Lew, it brought fresh grief and underscored how difficult it had been growing up without a dad. The Waltons forever will be, a Gold Star family. 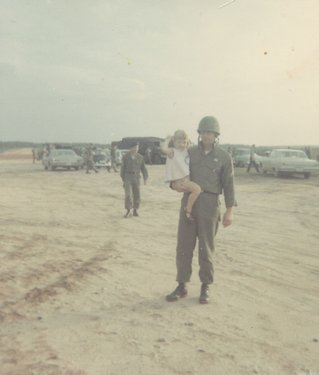 Special Forces SFC Lewis Clark Walton holding Jacke WaltonJacke’s experiences prompted her to meet with recent Gold Star families – those whose loved ones had been killed in Iraq and Afghanistan. Grieving together them all to cope and heal.

“Gold Star” is a term that describes a family member who has lost a loved one in military service. The term Gold Star originates from the Service Flag first flown by households during World War I. The flag included a blue star for every immediate family member serving in the armed forces of the United States during war. If that loved one died, the blue star was replaced by a gold star, signifying the sacrifice of that family in service to our nation. Today, Gold Star families honor and remember fathers, mothers, sons, daughters, brothers, sisters, and other loved ones who have given their lives in service to the nation.

There are many organizations that help survivors whose loved ones have made the ultimate sacrifice including, American Gold Star Mothers, who honor the memory of sons and daughters lost while in active duty military service by serving veterans and healing together; Sons and Daughters In Touch are Gold Star children whose fathers were killed in the Vietnam War; the Tragedy Assistance Program for Survivors (TAPS) offers comfort and support 24 hours a day, seven days a week through a national peer network, at no cost to surviving families and loved ones; Snowball Express provides hope and new happy memories to the children of military fallen heroes who have died while on active duty since 9/11.