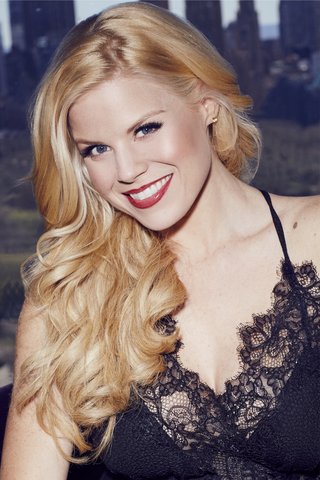 Megan Hilty is most recognizable for her portrayal of seasoned triple-threat Ivy Lynn in NBC’s musical drama “Smash.” She received critical acclaim for her role of Brooke Ashton in the Roundabout Theater Company’s revival of “Noises Off.” She earned nominations for a Tony Award, Drama Desk Award and Drama League Award and won a Broadway.com Audience Award for Favorite Featured Actress in a Play. She has also recurred on Bravo’s dramedy “Girlfriend’s Guide to Divorce” and the final season of CBS’s “The Good Wife.”

Hilty released a live album comprising of songs from her recent concert tour, “Megan Hilty Live at the Café Carlyle.” and completed a residency at New York’s Café Carlyle, where she previously performed the last two years. Additionally, she released a Christmas album, “A Merry Little Christmas,” and made her Australian debut as part of the Adelaide Cabaret Festival.

In March 2013, Hilty released her debut solo album, “It Happens All the Time,” which included fresh interpretations of compositions by contemporary songwriters and producers. Earlier, Hilty starred as Lorelei Lee, the diamond-loving blonde made famous by Carol Channing, in the Encores! production of “Gentlemen Prefer Blondes,” to which she earned rave reviews. Additionally, her voice was featured as Rosetta in Disney's “Tinker Bell: Secret of the Wings.” She has also recorded vocals in Disney's “The Secret Life of Magic Gourd,” “Phineas & Ferb,” “Glenn Martin DDS,” “American Dad,” “Tinker Bell and the Pixie Hollow Games,” “Robot & Monster” as well as singing as Snow White in the film “Shrek the Third.” Hilty can be heard in the animated film “Dorothy of Oz” with Kelsey Grammer, Hugh Dancy and Lea Michele. She can also be heard alongside Plácido Domingo on the opera star’s duet album.

A native of Seattle, Hilty moved to New York City after graduating from the prestigious Carnegie Mellon University and quickly made her Broadway debut as Glinda in “Wicked.” She went on to perform the role in both the national tour and in Los Angeles.

After receiving high praise for her portrayal of Doralee Rhodes in Broadway’s “9 to 5: The Musical,” Hilty was honored with nominations for Lead Actress in a Musical at the Drama Desk Awards, Outer Critics Circle Awards, the Drama League Awards and L.A. Stage Alliance Ovation Awards. Hilty has previously performed at Carnegie Hall with The New York Pops, the National Symphony Orchestra at the Kennedy Center, the New York Philharmonic at Lincoln Center, the Boston Pops, the Cincinnati Pops, the Houston Symphony and the Phoenix Symphony, among many others. She was also featured on TNT’s 2012 "Christmas in Washington" special and continues to perform at prestigious venues nationwide. Hilty is a frequent guest on PBS’s live televised concerts from Capitol Hill. Her solo concerts continue to sell out and receive critical acclaim across the country.