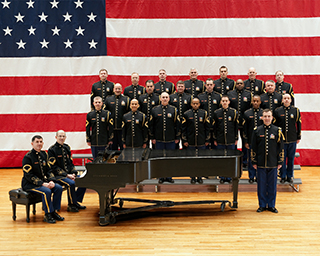 In 1956, The U.S. Army Chorus was established as the vocal counterpart of The United States Army Band "Pershing's Own," and is one of the nation's only professional men's choruses. From its inception, The U.S. Army Chorus has established and maintained a reputation of excellence in the performance of male choral literature. Beyond the traditional military music and patriotic standards, the repertoire of the Army Chorus covers a broad spectrum which includes pop, Broadway, folk, and classical music. The Army Chorus performs frequently at the White House, the Vice President's Residence, the U.S. Capitol, the Supreme Court, and the State Department. World leaders, such as former Presidents Nicolas Sarkozy of France, Jose Maria Aznar of Spain, Lech Walesa of Poland, and Mikhail Gorbachev of the Soviet Union have been serenaded by the Army Chorus during state visits. The U.S. Army Voices are a mixed vocal ensemble that presents a wide variety of styles. These dynamic performers have entertained audiences in a variety of spaces, from concert programs in The Music Center a Strathmore, to the Oslo Spektrum Arena for the 2012 Norwegian Military Tattoo, and in numerous other venues ranging from concert stages, music educator conferences, prestigious music institutions and camps, and live national television broadcasts.