Ursula Palmer and Gabriela Bowen reflect on the loss of SFC Collin Bowen a decade after they became a Gold Star family.

SFC Collin Bowen was weeks away from returning home to his wife, Ursula, and their 3-year-old daughter, Gabriela, when he volunteered for one last mission. Despite the superstition many service members feel about taking risks right before their tours are over, Collin chose to protect his fellow soldiers because he knew the terrain so much better. Before he left, he charged up his phone and told his wife that every day he would call so she would know he was okay. He kept that promise until January 1, 2008, when Ursula didn’t hear from him. Instead, she received the devastating news that Collin was severely injured and burned in an IED attack. After 15 surgeries and over 2 months in the hospital, Collin died of his injuries on March 14, 2008.

“When Collin passed, all my worst fears had come true. I had to be strong for my daughter. I had to be, as much as I could, father and mother for her.”

The 2019 National Memorial Day Concert shared Gold Star widow Ursula Palmer’s journey from grief to healing and her resolve to find purpose in helping wounded warriors and other families who’ve lost a loved one in service to our nation. 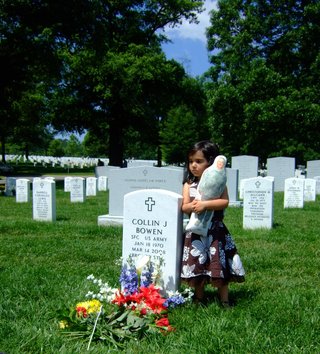 Gabriela Bowen visiting her father's grave as a child on Father's Day.

Families of fallen service members can feel isolated by their loss. For the three days of Snowball Express, children from around the world gather to have fun, meet new friends and share memories while making new ones. Snowball Express and related events are planned and staffed almost exclusively by volunteers, so there are many ways to help.

Ursula Palmer turned her grief into healing through helping others who've experienced loss.

Links to Freedom provides wounded warriors, disabled veterans, their families and caregivers, Gold Star spouses and their children with rehabilitative golf programs at military and civilian golf facilities nationwide. These programs support the mental, social, emotional and physical rehabilitative needs of those struggling to find a sense of normalcy and reconnect with civilian life and their families.