For the past 38 years, military service in the United States has been voluntary. As U.S. citizens, we are fortunate to have men and women who, knowing the dangers that may lie ahead, continue to answer the call and proudly serve our nation.

Behind every man and woman at war is a family on the home front. Their support is unconditional, their prayer always the same –– a safe return.

Kristofor Stonesifer was one of those brave and committed young people whose life goals included becoming a U.S. Army Ranger. Thirty-eight days after Sept. 11, he was the first killed in action in Operation Enduring Freedom. He and Jonn Edmunds, a fellow Ranger, died on Oct. 19, 2001, in a helicopter crash the first night of major military operation in Afghanistan. 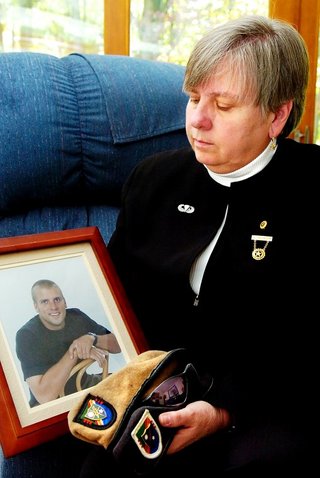 Ruth Stonesifer, proud Gold Star mother of Kristofor Stonesifer Kristofor’s mother, Ruth Stonesifer, became the first Operation Enduring Freedom mother to take on the national presidency of the American Gold Star Mothers, which she described as a “wonderful organization none of us ever wanted to become eligible to join but we are grateful to have.”

This organization of mothers who have lost a child in military service began during World War I. Its founder, Grace Darling Seibold, began visiting servicemen returning home to hospitals as a means of coping with her sorrow, after her son George was reported missing in France. George was eventually confirmed to be dead, and Grace expanded her work to include other mothers of the fallen. Over 100 years later the organization continues. The Gold Star Mothers' website provides their clear and compelling point of view: "The success of our organization continues because of the bond of mutual love, sympathy, and support of the many loyal, capable, and patriotic mothers who while sharing their grief and their pride, have channeled their time, efforts and gifts to lessening the pain of others. We stand tall and proud by honoring our children, assisting our veterans, supporting our nation, and healing with each other."